The beach vegetation on the north-west coast of Dirk Hartog Island off the Western Australian central coast. Taken during field work to study sandhill frogs.

Knowing how organisms adapt to environmental change, particularly dramatic change, is fundamental to understanding the patterns and processes underlying organismal biodiversity. Dynamic environments provide new ecological opportunities, which are thought to have resulted in some of the most spectacular radiations on the planet. Clarifying the processes underlying such diversification has significant implications for the maintenance of species’ evolutionary potential and conservation.

What ecological factors drive speciation and population divergence? How does the environment shape phenotypic and behavioral evolution? What is the contribution of ecological factors and social or sexual interactions throughout the speciation process? How is all of this information relevant to the conservation management of species?

Our research group is interested in all of these questions and more! Most of our research focuses on reptiles, particularly lizards to answer these questions. To do this we use integrated data from ecology, morphology, genetics/genomics and more recently behavior to create a holistic view of the evolutionary processes resulting in speciation and intra-specific divergence.

Dan helping a friend on field work to study burrowing frogs in the Pilbara, Western Australia.

The recent and rapid evolution of arid and semi-arid environments also provide an optimal arena for much of our research. We are particularly interested in these habitats as they are set to dramatically expand under human-induced climate change scenarios. Therefore, understanding how species have adapted to these habitats and the factors that have driven speciation in these regions is pertinent for clarifying future climate change impacts. As is understanding how social/sexual interactions impact the speciation process in different ecological contexts, as species’ distributions are already being dramatically altered – resulting in novel species interactions. 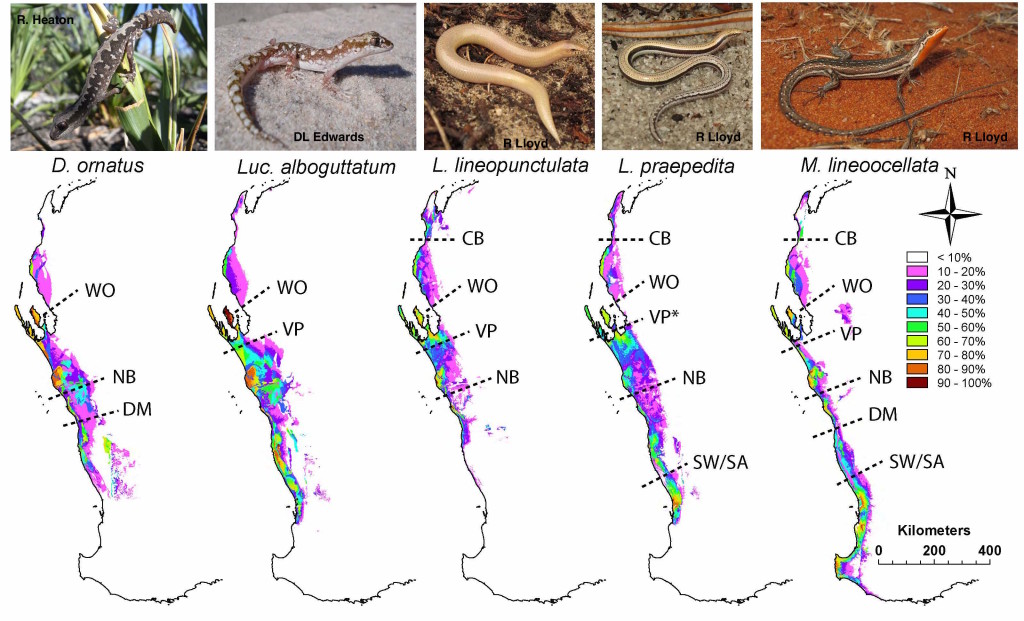 Figure showing the species distributions of five endemic reptile species from the southwestern coast of Western Australia. Habitat suitability scores are shown in the legend and each map shows the significant breaks in habitat suitability for each species. See Edwards et al. (2012).

Explicitly identifying the landscape and climatic changes that drive population divergence and speciation in spatially and temporally dynamic regions can be difficult. Particularly, as species physiological and ecological requirements differ, both of which have impacts on their dispersal capabilities. While many researchers focus on the commonalities between species – we are interested in why species are different. Our research in this area suggests that idiosyncratic species differences determine the significant impacts that habitat characteristics (i.e., spatial connectivity, spatial heterogeneity, climatic gradients, fluctuating habitat distributions) have on the distribution of genetic variation across communities in dynamic ecosystems. We have found that divergence histories reflect the individual ecological restrictions of species that comprise a community, rather than any one particular event that is congruent across all taxa.

Much of our research in this area in the past has focused on the reptile and amphibian communities of the south-western Australian biodiversity hotspot. Our research blends information from species’ environments, their genetic structure and occupied niche space. There is also scope for incorporating physiological information into our understanding of how communities evolve. We hope to expand this research into other regions of the world in the future, particularly here in the US. 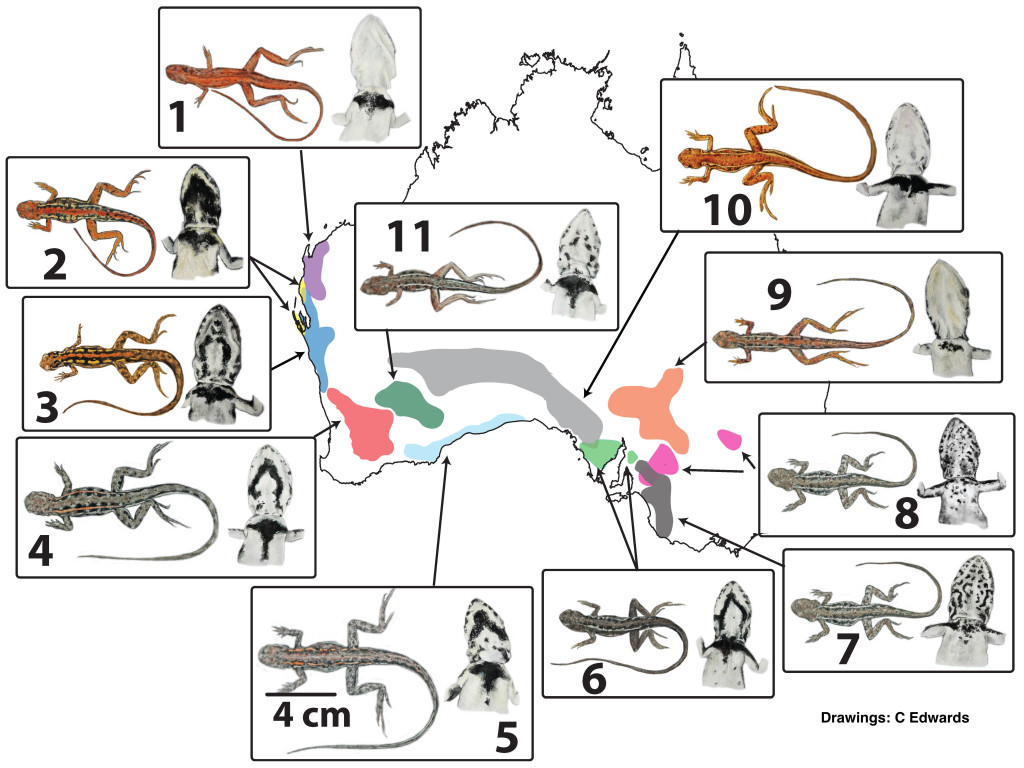 Figure showing the distribution of sand dragons across the southern arid sand habitats of Australia. Pictures of the dorsum of each species are shown to scale (see sp. 5), ventral signals (not to scale) are also shown for each species. See Edwards et al. (2015).

In order to understand the processes that have resulted in the incredible diversity of life we see around us, we need to identify the mechanisms driving species diversification. Species may accumulate dramatic phenotypic differences through adaptation, whereby an organisms environment shapes its morphological or behavioral evolution for optimal fitness.  Sexual selection, driven by mate choice or intra-sexual competition, is also commonly identified as a mechanism resulting in species diversification. While often historically considered as independent mechanisms, research by ourselves and many others suggest that both work together to drive speciation to completion.

This is a new and developing area for our lab. Our work has shed light on the role of ecological divergence in driving convergent phenotypic evolution in recent and rapid radiations. We are in the process of developing a number of empirical systems to ask questions about how sexual selection, adaptive evolution and shifting species distributions work together throughout speciation, from its inception to its completion. Our lab is also interested in role of phenotypic polymorphism in driving speciation, and the ecological conditions that promote its persistence and evolution. Other areas we hope to expand into include the genomic mechanisms allowing rapid evolution of adaptive and sexual signaling traits.

So far our work in these areas cover Galápagos tortoises, Australian sand dragons, and some Phrynosomatid taxa (specifically Sceloporus occidentalis and Uta stanstansburiana). More on this soon! 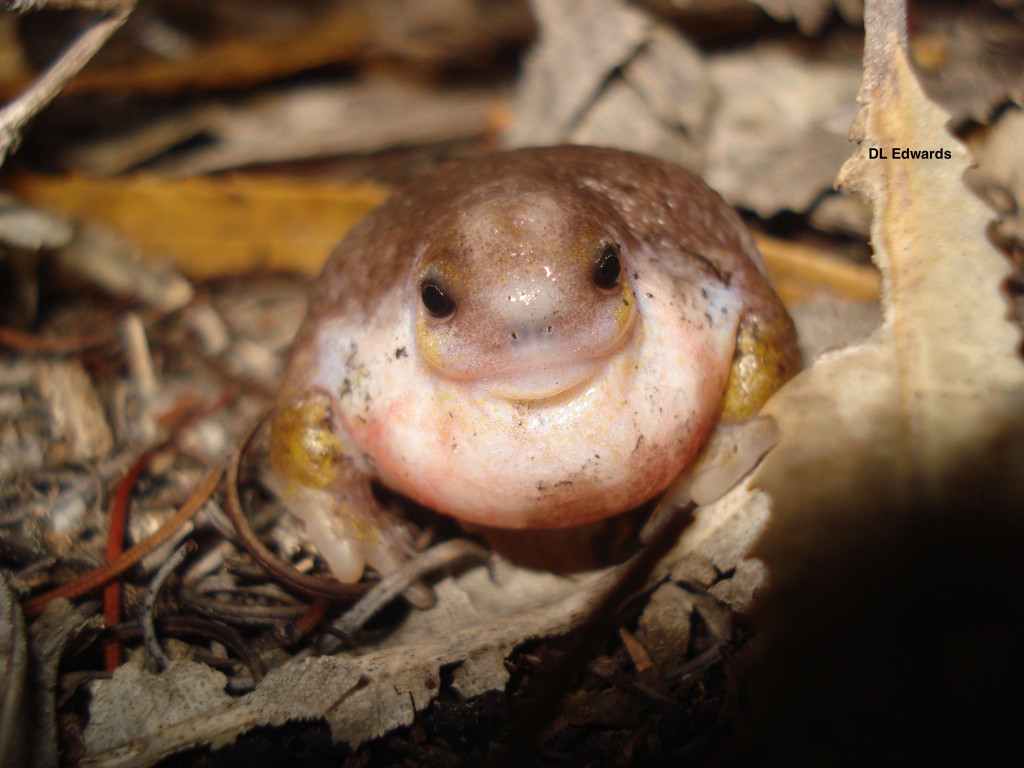 The weird and wonderful turtle frog, snapped during a trip to see these wonderful beasts calling north of Perth. See Vertucci et al. (2017) for a phylogeography and morphological analysis of this species.

All of the work discussed above has applications for the conservation management of vulnerable and endangered species. Our lab has strong roots in applying integrative evolutionary study to conservation management questions, with the purpose of enriching long term strategies for maintaining species’ persistence. This includes mapping patterns of population genetic structure and dispersal in relation to habitat connectivity and climatic change, and exploring genetic/genomic techniques to identify conservationally important individuals. We are always looking for novel ways apply evolutionary research to conservation problems.

Our work in this area covers amphibians and reptiles from the south-western Australian biodiversity hotspot, Galápagos tortoises and Galápagos racers currently.